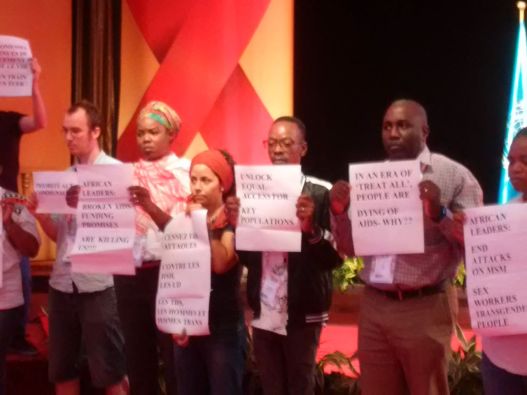 A networking zone for men who have sex with men (MSM) at the African regional AIDS conference was vandalized Thursday night, with posters torn down and boxes stolen. The International Conference on AIDS and STIs in Africa (ICASA) met in Abidjan, Côte d’Ivoire from 4-9 December 2017. Despite numerous logistical problems and what some activists called “shrinking civic space”, civil society presence was strong and energetic throughout.

“We packed everything together neatly and covered it with a banner the night before,” in the MSM networking zone, said Delane Kalembo of African Men for Sexual Health and Rights (AMSHeR), which coordinated the zone. “When we arrived at eight the next morning, the stand that we used had been pulled out, material we had posted had been ripped off, two boxes of materials were stolen, and chairs were all over the show. It looks like our booth was targeted.” The vandalism was one of several incidents raised by civil society groups, who described “closing space” for communities at ICASA.

The MSM networking zone, before and after the vandalism. Photo: AMSHeR

At what one participant called a “stormy” meeting to complain to conference organizers on Friday, activists protested the elimination of a planned “human rights networking zone”, and a protest shut down by police, as well as lack of human rights and key populations sessions on the formal program. Coordination of the first regional AIDS conference in West and Central Africa was described as mixed at best. “This was supposed to be a safe space,” said Kalembo.

Regional and international AIDS conferences always include a community village for civil society meetings, including a human rights networking zone. Lynette Mabote of the AIDS and Rights Association for Southern Africa (ARASA), which organized the zone, said that though the human rights zone was pre-approved by the conference organizers with a program of events “dealing with numerous critical human rights issues that were otherwise not covered” in the conference, ARASA was shocked when the zone was cancelled at the last minute. Instead, ARASA was told to share space with the MSM networking zone, which Mabote said “risks conflating” human rights and MSM issues.

On Tuesday, police also blocked a protest organized by the International Treatment Preparedness Coalition (ITPC) on lack of access to treatment in West and Central Africa, citing concerns for the security of the first lady of Côte d’Ivoire, who was speaking at the plenary. Protesters were banned from the conference for five hours after the event. AIDS conferences usually include peaceful protests, a part of the culture of global AIDS activism. 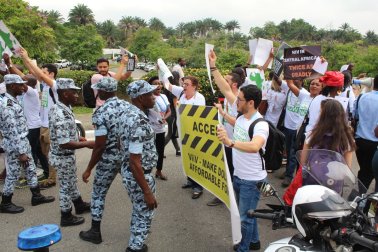 On-site registration costs were high for a regional AIDS conference (US$900 for those from developed countries, $600 for developing countries). However, the meeting was marred by logistical challenges. The poster exhibit was case in point — something I personally experienced as a poster presenter. There were only about 100 numbered boards to hang posters, though over 300 poster abstracts were approved each day. Exhibitors scrambled to put their posters up in empty spaces — in hallways, on windows, on each other’s boards. A lone volunteer, besieged by questions, advised me to hang my posters under someone else’s number.

Despite these logistical and political challenges, the conference was thronged with energetic African AIDS activists of all ages, and civil society participation was present in force. The poster hall was filled with young researchers, many at the meeting for the first time and electrified to share their work and meet peers. Many had reports on studies of HIV among key populations and young women, or had work on pre-exposure prophylaxis (PrEP) trials rolling out across the continent. At a conference panel on biostatistics, speakers called for the development of an African research agenda: a project that seemed well underway among young researchers down the hall in the poster exhibit.

Despite the attempts to marginalize sensitive issues, both the MSM networking zone and human rights advocates found space around the meeting and on the sidelines for sessions that connected Francophone and Anglophone activists, many for the first time.

Allan Maleche, member of the Global Fund Board and a human rights lawyer in Kenya, said that ICASA 2017 showed the best and the worst of the moment in the region. “We see shrinking space for civil society in an alarming manner, violations of rights to freedom of expression, and the mysteriously disappearing human rights networking zone,” he said. “But ICASA gives space for multistakeholders to meet, discuss and form evidence-based and rights-based approaches to end the epidemic. It’s also a chance for civil society to hold African leaders accountable on promises they have made.”

To do that, he said, ICASA must put human rights of people living with HIV, people affected by TB, women and girls and key populations front and center at future meetings.

ICASA was contacted for comments, but did not respond before the deadline.

Disclosure: I work as a consultant and Allan Maleche’s delegation, AMSHeR and ARASA are now or have in the past been clients. My travel to ICASA was self-funded