As the dog sled slashed across deep snow, young Inuit men and women raced alongside, jumping on and off the sleds, hooting and laughing, teasing one another in the blinding white plain. I watched from beside a wood fire, and wondered: aren’t they COLD? They were on a screen in the town square of Tromsø, Norway, a glowing town above the Arctic Circle. This Inuit-directed film, “One Day in the Life of Noah Piugattuk”, was opening the Tromsø International Film Festival. Standing in a light snowfall before that screen, hot coffee cup in hand, I began to sense the cleansing power of snow and fire.

I reached this sixth stop on the winter road with a short hop of a night flight from Tallinn. Tromsø is an old Sami and Norse town, long a base for hunting, shipping, and polar expeditions. The airport was full of men hauling equipment further north, and the night street echoed with the grinding of machinery toiling underground, drilling and building. In the little red building that houses Tromsø’s Polar Museum, I strolled past dioramas of seal hunters and polar bears, read diaries dug out of igloos, and scoured the black-and-white photographs of bearded men, searching a clue about what it takes to survive bitter cold. Inspired, I put on my snow boots, crossed the bridge to a cable car up the lookout hill, trudged snow and gazed down at the glowing, busy port. As teenagers ran past, singing wildly in the snow, the sun briefly reddened the sky, which then lightened to a long blue dusk. It was lunchtime: time to descend the hill to look for warmth before the streets vanished into polar night.

A few days later I was lacing up my boots for real, with my great friend Jan, in Kuusamo, central Finland. We were booked on a one-week snowshoe trek. Our group was five men and six women from various countries, meeting in a former logger’s cabin in Hossa National Park. Our guide, Petri, a seasoned outdoorsman, got us settled into our 1950s-style dorm rooms, fed us up on rye bread and salami, and taught us our equipment. For a few days, we trailed him through forests, over hills, and across frozen lakes, huddling over campfires. Petri carved holes in the lake to get the water to brew coffee. By night, we melted tired muscles in a sauna. Petri explained that the sauna was core to Finnish life, a communal place to cleanse body, mind and soul.

The snow was thick and rich as powdered cream. If you fell in it, you could sink down for what felt like miles. On the first day, Jan and another woman went behind a tree to answer a call of nature, and I heard shouts of laughter bouncing off the birch trees: she had lost her balance, slipping backwards over her snowshoes, and had to be hauled out of a snow bank, pants around her ankles. Over the virgin waves of snow, the cathedrals of trees were ramrod straight spans of red ochre; the horizonal branches layered with a thin line of snow were etched in charcoal. By night we brought out our liquors, and tasted the cedary flavor of the gin I’d carried north from Riga and chilled in a snow bank. Petri told evening stories about Finnish forest culture, about the oral epic the Kalevala, and about sisu, the Finnish word for fortitude. Afterwards I lay on my bunk bed, staring out the window at stars that were huge and piercing.

Gradually he led us to cabins off the grid, deep in the forest, where we worked as a team to chop wood, make fires and haul water. We hiked each day in single file – the fastest at front, breaking the trail by plunging into deep snow; the slower at the back of the line, where the snow had been tramped down into a hardened corridor. Up front, charging through waves of snow, I pounded my heart to warm up numb fingers and toes; then I’d slip by stages to the more relaxed back of the line, free to think and feel. 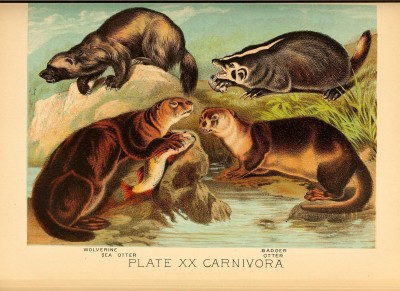 That younger version of myself I’d re-met on the road, a woman in her twenties, bounded alongside me on this last stretch of the winter trail, her ponytail flying against the sky. She had traveled past rest and renewal: now she looked a little crazy, wild-eyed with ice-fired inspiration. With a clearer mind’s eye, I recognized her as the inner poet I’d left behind to start an adult career. With that recognition came a lashing of euphoria, emerging from heat into icy air. Right there on the trail she turned into a small creature like a wolf or a bear –  a wolverine, charging into my gut like it was her cave. Wolverines are fast and vicious; they take down larger creatures without a thought. You may live to regret underestimating one, or you may not live. Like poets, they are scavengers, ruthless and voracious. I let this inner wolverine race in and out of my solar plexus, growling and snapping.

The thin golden forest ridge of sunset lit our way to the next smoky, powerful sauna. I grew that fire from a scrap of curling silver birch bark in the stove. Waiting for the sputtering, gasping flame to take hold, I sat on the wooden sauna bench, looking out the small window at the trees as they darkened. The heat pounded on the door of the stove, fire demanding entry. In a few hours, Jan and the other four women would run out from that room screaming, to jump into an ice hole of the frozen black lava-like lake water, or to roll bare-assed in the snow. I would stand under those elegant towering trees, bare body steaming, press handfuls of sugary snow on my face and chest, and then float back into the roaring sauna. We would never see the aurora borealis on that trip, but we brought the fire home.

Tromsø International Film Festival is in January of each year – https://tiff.no/en

The Polar Museum is a small university museum with cultural, scientific and historical insights into polar life and expeditions – https://en.uit.no/tmu/polarmuseet

For more photos from my trip, check out @saralmdavis on Instagram