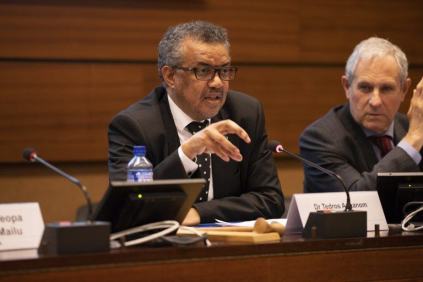 This blog appeared on Health and Human Rights.

In exploring what can be learned from the experience of the Global Fund to Fight AIDS, TB and Malaria in the shift towards Universal Health Coverage (UHC), speakers on a recent high-level panel in Geneva pointed to three key lessons: the importance of embracing health as a human right; the role of the Global Fund’s investments in building stronger health and community systems and in advocating for the rights of key populations, women and girls; and the central role played by communities in advocating for their rights and in planning, implementing and evaluating the HIV response.

The panel in May was sponsored by the French government, which will host the Global Fund’s sixth replenishment conference in October 2019. France has been active in championing the human rights of key and vulnerable populations at the Global Fund. Civil society advocates have called for a significant increase in funding of $16 billion for the Global Fund in order to meet the Sustainable Development Goal (SDG) of ending HIV, TB and malaria by 2030.

The panel brought together Dr. Tedros Adhanom Ghebreyesus, Director-General of the World Health Organization (WHO), ambassadors, and global health champions from the public sector and civil society. They argued that as part of fulfilling the SDGs, expanding Universal Health Coverage will only be successful if it works with and for those most marginalized, criminalized, and impoverished. Erika Castellanos, director of programs for Global Network for Trans Equality (GATE), said countries may have ‘an amazing facility, but no one will go there’ if community health needs have not been understood and met through rights-based programming.

‘We appreciate the narrative in the Sustainable Development Goals about leaving no one behind,’ agreed Rico Gustav, executive director of the Global Network of People Living with HIV (GNP+), but ‘communities most affected by HIV were never there in the first place.’ This is because key populations, including men who have sex with men, sex workers, transgender people, and people who use drugs, face widespread violence, stigma, and discrimination, including in the health sector, he said. GNP+ has called on countries to ‘reach the last mile first, as health coverage that works for the minority will also work for the majority.’

Dr. Tedros (left) opened the meeting by strongly affirming that health is a fundamental human right. He noted that half of the world’s population still lacks access to essential health services and 100 million people descend into poverty each year due to out-of-pocket payments for health services. When catastrophes strike, ‘it’s the marginalized who are most affected.’

Dr. Cleopa Kilonzu Mailu, Ambassador and Permanent Representative of the Mission of the Republic of Kenya to the United Nations, agreed with Dr. Tedros that the right to health places obligations on countries. She spoke of Kenya’s national constitution which upholds the human right to health. This mandates the government to expand access to health services by eliminating user fees and expanding financial protections for poor and marginalized populations, especially women and children. Dr. Tedros echoed community activists: ‘The point of Health for All is that everyone must be included: migrants, rural populations, people in prison, the LGBT community, sex workers, drug users, poor people.’

The panelists agreed despite some misconceptions to the contrary, the Global Fund’s investments in HIV, TB and malaria had in fact contributed to building the infrastructure needed for strong health systems. Ambassador Mailu said the Global Fund ‘helped us to build strong supply chains, access quality medicines, and other health systems which we can now leverage for broader health coverage.’ Similarly, Dr. Tedros recalled that in Ethiopia, primary health care had been built in part with systems first put in place by the Global Fund. Peter Sands, executive director of the Global Fund, said that he had seen this repeatedly in his visits to countries: ‘If you want to beat the three biggest diseases, you have to build health systems. And even if your focus is purely on the health system, any system that doesn’t get on top of the three diseases won’t be able to provide the other services people need.’ Twenty-seven percent of Global Fund investments are dedicated to building resilient and sustainable systems for health.

However, Sands stressed that the Fund could not do it alone: countries also need to step up their domestic financial contributions to match the Fund’s investments. The Global Fund has catalyzed $7.9 billion additional domestic financing for health during 2017-19, a 42% increase over the previous funding cycle. While most lower-income and lower-middle-income countries have committed to UHC, he said, many do not contribute as much financially as they could. Dr. Tedros agreed, reminding African Union member states of their commitment to allocate 15% of their budgets to health in the 2001 Abuja Declaration.

Panelists emphasized the inclusive and democratic governance system of the Global Fund as key to its success. Gustav said for UHC to be effective, key populations must be included in national and global health governance as beneficiaries, and as leading actors who plan, implement, and evaluate health programs. Community-led responses can alert governments if programs are not reaching their intended targets, enabling corrections. Community-led responses can also help to reach criminalized and hidden populations that the formal health sector fails to reach.

However, Gustav cautioned that key populations-led advocacy cannot be done for free: ‘While communities are committed and passionate, this work needs to be supported financially as well as politically.’ The Global Fund is one of the few aid agencies to invest in community systems, he said. ‘We have proven that when there are proper investments in both government and civil society systems, and there’s a facilitation process to bridge these two, it opens up the door— other things can happen.’

Oxana Rucsineanu, Vice President and Program Director of the Moldovan National Association of TB Patients (SMIT), described her experience of surviving the harsh treatment regimen for multi-drug-resistant tuberculosis (MDR-TB). ‘The most vulnerable are people living with HIV, people who inject drugs, migrants, mobile populations, indigenous people, miners, and people in poverty.’ People with TB also ‘need to build a strong TB community and movement.’ She noted the recent launch of the Declaration of the Rights of People Affected by Tuberculosis.

Sands agreed, and said that for this reason, the Fund strongly encourages countries preparing to transition out of Global Fund support to develop social contracting mechanisms to enable government to partner with NGOs.

Castellanos cautioned that transitions like these are risky moments for communities: the chief platform for collaboration at the national level, the multi-stakeholder oversight committees known as Country Coordinating Mechanisms (CCMs), is sometimes abandoned when the Fund leaves middle-income countries. She called for countries to keep their CCMs in the shift to UHC.

All the panelists underscored the fragility of the gains made to date. Rucsineanu said that when her organization helps people with TB to access treatment, ‘You can see the expression in their eyes changing from despair to hope. We can’t stop now.’ Sands said that ‘There isn’t a middle ground, steady-as-you-go solution with the three diseases: you’re either winning or you are losing.’ He called for a $14 billion replenishment for the Global Fund.

Making Universal Health Coverage Work for Key, Vulnerable and Underserved Populations: The Role of the Global Fund to Fight AIDS, TB and Malaria took place in Geneva in the Palais des Nations on 7 May 2019. It was sponsored by the Permanent Mission of France to the United Nations Office and GNP+, as well as other international organizations in Switzerland, including: Aidsfonds, the Global Fund, the Elizabeth Glaser Pediatric AIDS Foundation, Groupe Sida Genève, International Planned Parenthood Federation (IPPF), Medicus Mundi Schweiz, and Partnership to Inspire, Transform and Connect the HIV Response (PITCH).

Acknowledgment: Thanks to the PITCH Programme for support in the development of the event report.