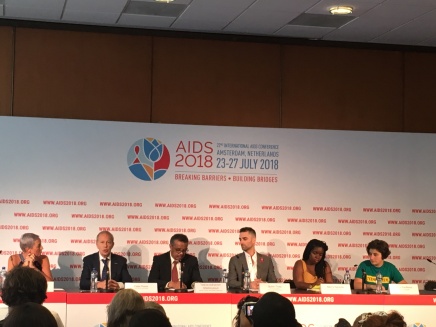 I covered the International AIDS Conference in Amsterdam last week for the Harvard University Health and Human Rights journal – here are a few of the blog posts.

The International AIDS Conference opens today in Amsterdam, with up to 19,000 scientists, activists, and officials coming together from around the world. The world has come a long way since the last time the meeting took place here, in 1992, with old and new challenges on the horizon.

In 1992, an old world order was giving way: South Africa was dismantling apartheid, Russia was an emerging democracy, and the European Union was newly founded. HIV was a global crisis and fast becoming a leading cause of death, with an estimated 1.5 million cases. Twenty-six years later, although there are an estimated 36.9 million people living with HIV globally, the world has become complacent about the epidemic. That’s in part because of widely available antiretroviral treatment, and global institutions that fund and distribute treatment and prevention in low resource countries.

But delegates and activists gathered here in Amsterdam say a crisis is imminent as a result of donor withdrawal from middle-income countries in Eastern Europe and Central Asia; human rights violations driving transmission among key populations; and cases on the rise among hard-to-reach young people. All this means, according to UNAIDS, that HIV is at risk of becoming a resurgent global pandemic.