In February, I gave a talk about the course I teach on sexual violence at the first Riyadh International Humanitarian Forum. I’ve been remembering that trip since learning of the recent arrest of women’s rights activists in Saudi Arabia.

There is little tourism in Saudi Arabia – at the time I visited there were no tourist visas. Most visitors are pilgrims to Mecca, which is barred to non-Muslims. In January, I saw a call for papers, and sent in my abstract for the controversial topic without ever expecting to hear back. My abstract was approved, and I received a letter of invitation, a visa, and plane ticket just days before the forum began on 26 February. After reviewing tips for travel to Saudi Arabia (“women should not travel alone…avoid speaking about sex in public”) I shrugged, packed an abaya, got my slides translated with help from the awesome Egyptian rights activist Amani Massoud, and hopped a flight to Riyadh.

The forum was hosted by KS Relief, a government-sponsored center for coordination of Saudi humanitarian projects. This relatively new organization manages over 400 projects totaling about US$1.7 billion. I learned that Saudi Arabia has one of the largest humanitarian aid budgets in the world, with major donations to the World Food Programme (WFP), UN High Commission for Refugees (UNHCR), and the UN Office for the Coordination of Humanitarian Affairs (OCHA), among others.

Those agencies sent their highest-ranking men – yes, men — for the two-day plenary agenda, (entirely male with the sparkling exception of ODI managing director Sara Pantuliano). Some of the UN agencies openly pitched for financial investment in their sessions: the threat of the US withdrawal from the UN has everyone’s nerves on edge. The meeting felt historic; the hallways of the Intercontinental Hotel buzzed. King Salman even appeared on the first day to bestow awards.

Foreign scholars spoke on the “academic track”, a series of side-meetings that included some quite renowned human rights experts but that most participants did not know about, as they were not part of the formal agenda. There seemed to be two female Saudi scholars on the academic track, one speaking about rights of the child, the other about the challenges of providing humanitarian aid under threat from terrorism. As for my pretty standard and hopefully practical presentation on sexual violence, the response was quiet and gracious. 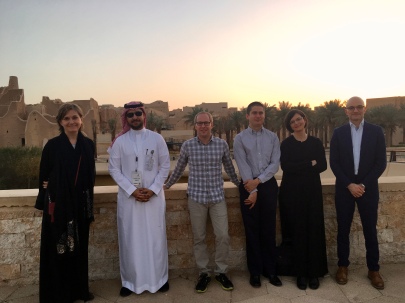 More exciting were my interactions with advocates for women’s rights, male and female, outside of the meeting. I heard about the decade plus of mobilizing across the country for the right to vote, successful campaigns by women for elected office, and for the right to drive. The ban on women driving is scheduled to be lifted in June.

At the same time, the work ahead is daunting: for instance, eliminating the male guardianship law. I heard that women who finish their prison sentences, including those jailed for running away from abusive spouses, may not be able to physically leave the prison without a male guardian to pick them up. Some wind up spending years in state-run halfway homes. While the challenges are huge, the activists were focused and determined. That was in February.

None of the people I met were among the 11 detained in the past two weeks. According to Amnesty, Saudi media have launched a “chilling smear campaign” to call those activists “traitors” for their links to foreign allies. It seems like a dark moment for a country that felt, in my very short and superficial visit, hopeful, dynamic, and ready to move. Maybe not everyone was ready.

One evening, KS Relief organized buses to take the foreign participants to Al Janadriyah, a wildly popular annual festival on the outskirts of the city. Each year, the national guard builds up vast areas of land in a reconstruction of the country in miniature for two weeks, with small Meccas, Jeddas, and Riyadhs showing off local dance, clothing and foods. We spent a magical evening roaming the mini cities, rubbing shoulders with families, queuing for treats, and watching sword dances till nearly midnight. (That’s the closest I’m ever likely to get to Mecca.)

The two young women who escorted us were radiant, cracking jokes, racing to buy each kind of treat, and showing off the displays and helicopters with delight. They spoke about their plans to get graduate degrees and have careers helping others. I hope we’ll meet again.